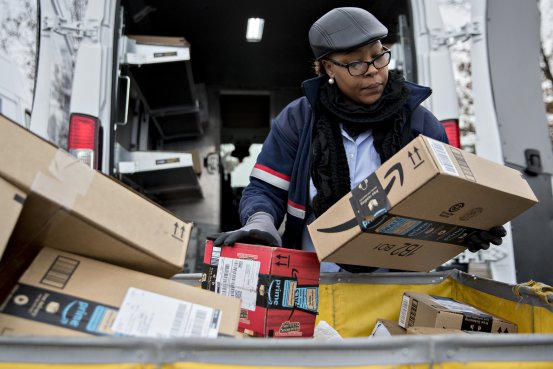 President Donald Trump said Friday that the U.S. Postal Service should charge Amazon.com Inc. and other companies more to deliver their packages.

“Why is the United States Post Office, which is losing many billions of dollars a year, while charging Amazon and others so little to deliver their packages, making Amazon richer and the Post Office dumber and poorer?,” he tweeted Friday morning. “Should be charging MUCH MORE!”

The Postal Service has said it delivers more e-commerce packages to homes than other carriers. Amazon is widely believed to be one of the Postal Service’s biggest customers for package deliveries. Neither the USPS nor Amazon immediately responded to requests for comment.

Analysts have long estimated that the Postal Service is cheaper for Amazon to use than traditional carriers such as FedEx Corp. and United Parcel Service Inc. In 2013, Amazon started taking most of its packages directly to the Postal Service.

By directly injecting its packages into the Postal Service’s network, Amazon and other large shippers can avoid the costly last leg of delivery, while handling the sorting and transportation further upstream.

But some critics suggest that the USPS is underpricing such services and that the e-commerce deliveries are being subsidized by the universal service obligation that the USPS must maintain under congressional edict. The universal service obligation is a collection of requirements that ensures all users receive a certain level of service at a reasonable price.

Mr. Trump in his tweet ties Amazon’s rise to the quasigovernmental agency’s deteriorating financial situation. The USPS posted a $5.6 billion loss in its 2016 fiscal year, however, it recorded $5.8 billion of expenses tied to retiree health benefits.

Earlier this month the federal agency that oversees the USPS gave the service permission to speed up its pricing increases over the next five years.

The plan would allow the postal service to raise rates on “market-dominant” products, which includes first-class mail, by up to 2 percentage points above inflation each of those years.

The Coalition for a 21st Century Postal Service, a group representing corporate mail customers such as Amazon and Bank of America Corp., said at the time it was disappointed with the decision.

has said she’d prefer to eliminate price caps altogether. She has also called on Congress to act on postal reform legislation, which would shift retired postal workers to Medicare and change the funding schedule for some retirement benefits, to ease some of the financial burden.

All of the major carriers—FedEx, UPS and the USPS—as well as regional carriers, handle Amazon orders. One of the online giant’s favored shipping options is the USPS’s Parcel Select service, where Amazon sorts packages in its own warehouses and injects them into the USPS network near their destinations for the last-mile trip to homes. The service is also available to other shippers and is also used by FedEx and UPS for the final leg of many deliveries.

The USPS has faced questions for years as to whether it is charging enough for that service, especially as its popularity has skyrocketed. The USPS carried 2.8 billion pieces through Parcel Select in the fiscal year ended September 30, up 18% versus the prior year. Revenue per piece was $2.02 last year, up from $1.95, according to the latest financial filings.

A UPS spokesman said that the carrier has raised concerns with regulators about the USPS’s current methods for covering costs to deliver packages. A FedEx spokesman declined comment.

New prices go into effect in early 2018 for USPS’s Parcel Select option, with prices rising on average between 4.9% and 7%, depending on the parcel’s weight.

Higher shipping rates at the USPS could help boost revenue at other carriers, as USPS prices are generally viewed as a floor for parcel shipping rates. Bernstein analyst David Vernon said that should the USPS move to more aggressively raise prices, it could improve the economics of home deliveries for carriers like FedEx and UPS and could also put some large shipping accounts up for grabs.

Still, there are several regulatory steps that would have to take place before that occurs. “While there is real upside potential for both UPS and FedEx should the USPS get religion on rates, a Presidential Tweet is not he same thing as a rate increase,” Mr. Vernon wrote in a research note.

The Seattle-based e-commerce giant has been a frequent target of criticism from Mr. Trump, largely on how it collects sales tax on customers’ purchases. Amazon Chief Executive Jeff Bezos and Mr. Trump have had one of the rockier public relationships between the president and a company leader, in part because of the CEO’s ownership of The Washington Post.

Write to Cara Lombardo at cara.lombardo@wsj.com and Paul Ziobro at Paul.Ziobro@wsj.com

Let’s meet in Iceland next week

Build a digital marketing strategy for your business

Apple to Pay $38 Billion in Taxes on Cash Overseas, Build...

Amazon Is Reconsidering Plan to Put Campus in New York