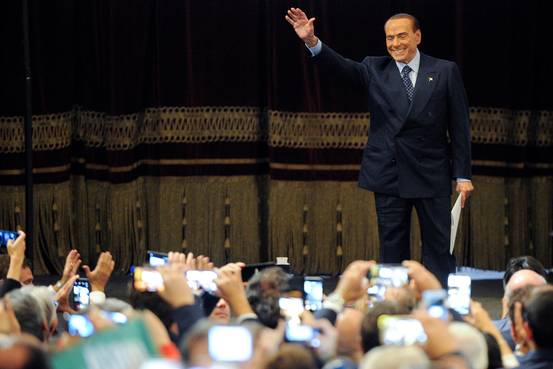 sat for a prime time interview last month on the biggest television station in his empire, fielding softball questions as gauzy images of his life floated across large screens in the background.

“What is love for you?” the host asked the 81-year-old billionaire, who grew misty eyed as he spoke of his family. It was about 45 minutes before the media mogul finally spoke about the upcoming Italian election.

The former Italian prime minister is potentially poised to play kingmaker in the election, which Italian President

called for early March after dissolving parliament on Thursday.

Polls suggest Mr. Berlusconi’s center-right Forza Italia party will get just 16% of the national vote, down from 29% in 2001. Yet the party could be decisive in forming a new government if Mr. Mattarella asks political leaders to form a broad coalition, as is widely expected.

The television interview served as the unofficial launch of Mr. Berlusconi’s campaign. His television stations have been central to his success in previous elections, and they remain popular, in particular among older Italians, said Carlo Freccero, a former producer with Mr. Berlusconi’s company,

SpA, who is now on the board of Italy’s state-controlled broadcaster Rai SpA.

“Television is the only type of media that many elderly consume and they are nostalgic for when Berlusconi first entered politics,” Mr. Freccero said.

Mr. Berlusconi dominated Italian politics for nearly 20 years. He burst onto the political scene in 1994, with bold promises and a populist appeal that has echoes in the approach of some current European upstart parties.

He served as prime minister that year and again from 2001 to 2006, which was the longest uninterrupted term of any Italian leader since World War II. He returned to office in 2008, only to resign under domestic and international pressure three years later at the height of the sovereign debt crisis.

Two years later, the Senate expelled Mr. Berlusconi following a conviction for tax fraud. He is banned from holding public office until 2019.

Also in 2013, a Milan court found him guilty of paying a minor for sex and then abusing his power to cover it up. An appeals court overturned that conviction. Mr. Berlusconi is now facing another trial on accusations he paid off potential witnesses tied to the sex case. He has denied all the accusations against him. He declined requests for an interview.

During last month’s television interview, the screens at one point said that Mr. Berlusconi has faced 74 trials and 3,667 hearings yet had “only one definitive guilty verdict.”

Mr. Berlusconi has maintained a core of support and stayed active in politics throughout.

“Berlusconi doesn’t give up ever for any reason,” says Sestino Giacomoni, a Forza Italia deputy close to the former prime minister. “He’s never done it as a businessman…or as a politician.”

There are about two dozen parties in the outgoing legislature, and a new electoral law encourages coalition building.

Mr. Berlusconi is courting conservative voters by presenting himself as a dam holding back the 5 Star Movement, the antiestablishment party that could emerge from the vote as Italy’s single-largest party.

He is mixing old promises, including a flat tax and better pensions, with new positions, such as skepticism about the euro, that have been championed by 5 Star and other parties.

“Berlusconi has always been a fighter and let’s hope he gets rid of the euro, which has killed us,” said Agnese Brusati, a 77-year-old Milanese pensioner, who attended a recent Berlusconi rally in Milan.

Mr. Berlusconi has also struck an alliance with the anti-immigration Northern League and a smaller party that traces its roots to a postwar party that included onetime Fascist officials. Polls suggest the three-party coalition could get about 35% of the vote, which could potentially give Mr. Berlusconi veto power over who serves as the new premier.

According to one senior Forza Italia official, the campaign plans to leverage Mr. Berlusconi’s television skills and the power of his broadcasters.

Mediaset, which controls Italy’s three largest private free-to-air stations, is no longer the juggernaut that boosted Mr. Berlusconi’s net worth to about $12 billion in 2007. It has been dragged down by an economic downturn that depressed ad revenues and by the arrival of new channels. Forbes now estimates his net worth at $4.3 billion.

But Mediaset still has about 23% of all viewers during prime time.

Nonetheless, Mr. Berlusconi’s November interview garnered a share of less than 9%, half of what Rai’s top channel got that evening, showing the limits of his appeal.

That isn’t likely to deter him, said Giorgio Simonelli, media professor at Milan’s Catholic University. “When he entered politics he was convinced he could save Italy and set Europe back on the right course,” he said. “He still thinks that.”

Write to Eric Sylvers at eric.sylvers@wsj.com

Appeared in the December 30, 2017, print edition as ‘Berlusconi Poised as Kingmaker.’

For skiing or Summer sunshine: the undiscovered wines of Savoie

How We Achieved an Olympic Feat of Immersive Journalism

I Listened To Taylor Swift’s ‘September’ Cover So Y’all Wouldn’t Have...