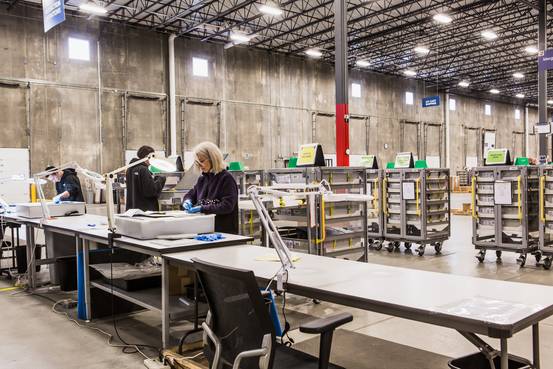 The list of the world’s largest employers was once dominated by household names like Ford Motor Co., J.C. Penney Co., and General Electric Co., companies that made and sold things.

A new analysis conducted for The Wall Street Journal shows those names are nowhere to be found on that list today. In their place are large outsourcing companies like

PLC, Accenture PLC and other businesses that essentially lease workers to clients.

Of the top 20 global employers in 2017, five are outsourcing and “workforce solutions” companies, according to an analysis by S&P Global Market Intelligence. In 2000, only one employer in the top 20—International Business Machines Corp., which offers outsourced IT services among its many businesses—fell into that bucket.

Outsourcing companies are vacuuming up the world’s workers as traditional employers are handing over more of their tasks to nonemployees, a shift that has transformed the way corporations do business and had profound effects on workers’ prospects and pay.

The past two decades have been boom times for the outsourcing sector, with the annual value of contracts growing to $37 billion in 2016 from $12.5 billion in 2000, according to research and advisory firm

The market is expected to rise again in 2017 and 2018, thanks partly to double-digit growth in big technology projects as more companies transfer massive volumes of data to the cloud.

For employers, dispatching work to outside companies saves money and lets them access skills they need without adding to their headcount. Workers in jobs that have gone to outsourcers, though, can feel moved around like chess pieces, either displaced entirely or re-badged as employees of a service provider, sometimes with fewer benefits and lower pay. A growing body of economic research suggests that outsourcing is a significant factor fueling the rise of income inequality in the past decade.

“If all the engineers are in one firm and the cleaners are in another, you get less diversity within firms and more inequality across firms,” says Nicholas Bloom, an economist at Stanford University.

Dublin-based Accenture, best known as an information-technology and consulting firm, has become the de facto back office for hundreds of client companies. The firm employs 435,000 people globally—up from some 200,000 in 2010—and serves 95 of the Fortune Global 100 with consulting or outsourcing services or both. Outsourcing comprised 46% of the company’s 2017 revenue, or $16.1 billion, up from 41% in 2011.

On behalf of loan-servicing companies, Accenture’s people collect debts from homeowners who defaulted on their mortgages. For large insurance clients, doctors and nurses employed by Accenture make wellness calls to diabetes patients. For Alphabet Inc.’s Google, it oversees contractors who review content for the search giant.

Companies say that unloading tasks to outside firms allows employees to do more high-value jobs. Providers like Accenture tell companies they can do their work better and more cheaply, prodding executives to view labor as an on-demand resource they can rent as needed.

“When CEOs tell me they want to keep all of their talent, my response is ‘Why?’ ” says longtime

boss Carl Camden, who retired earlier this year. “ ‘If they’re not our people, how can they be our people?’ is a tautology you have to work them through.”

The breadth of services on offer from outsourcing firms is staggering. Compass Group was founded in 1941 to run factory cafeterias in wartime England, eventually branching out into corporate catering. It now employs more than 550,000 and counts among its subsidiaries firms like Eurest Services, which staffs and manages mailrooms for clients, provides them with full-time receptionists, sets up their conference rooms for meetings and operates their warehouses. Eurest’s clients include Google, SAP and Pfizer Inc.

With so much work done outside the company, businesses employ fewer kinds of workers than they used to, a change that economists say has fueled income inequality.

Outsourcing leads to workers being clustered in companies according to their skills, which affects pay and benefits. A bank used to employ janitors and security guards, in addition to traders and salespeople. For the sake of morale and a sense of fairness, management had an incentive to limit the disparities in employees’ compensation. That had the effect of boosting the pay of lower-skilled staff.

Now, those janitors might just as often work for an outside firm like Denmark’s ISS AS, one of the largest facility services companies in the world, while the high-skilled workers remain employed by the bank—a trend economists call occupational sorting. Pay for outside workers tends to be lower because outsourcing firms need to keep costs low to compete for contracts and because the workers don’t reap rewards from the financial successes of the bank.

Companies that provide security guards or IT help-desk workers have to show they can do the job more cheaply than the client can, keeping a tight lid on wages for those workers, says David Weil, a Labor Department official in the Obama administration and an expert on contract labor.

Outsourcing firms’ workforces, though, may shrink as algorithms take on more tasks, says Steve Hall, a partner at ISG.

“The large outsourcers are using a combination of analytics and automation to significantly reduce the need for labor,” he says.

Appeared in the December 29, 2017, print edition as ‘Outsourcing Grabs More of Workforce.’

A Groundbreaking Heart Stent Experiment Reveals The Power Of The Placebo...

What a $4,000 Treadmill Means for the Future of Gadgets

How You Can Be More Culturally Responsible When You Travel

Your Genetics Might Affect Fertility More Than You Think

Leaves are falling, so pack your bags!

The Real ‘War on Coal’ Is in China