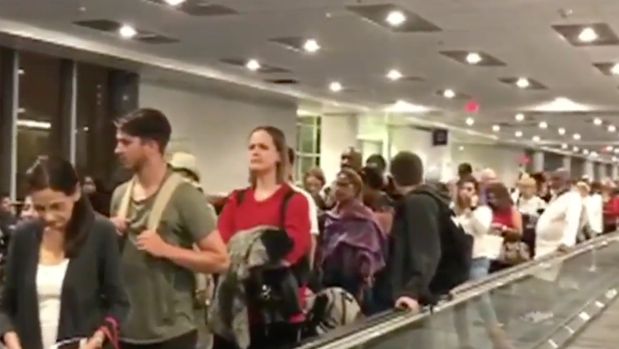 WASHINGTON (Reuters) – Immigration desk computers at various airports went down for about two hours on Monday, causing long lines for travelers entering the United States after year-end holidays, according to Customs and Border Protection and posts on social media.

The processing system outage began at about 7:30 p.m. EST and was resolved about 9:30 EST, the customs agency said in a statement. All airports were back on line after wait times for travelers that were longer than usual, it said.

“At this time, there is no indication the service disruption was malicious in nature,” the agency said. It gave no explanation for the disruption and said travelers were processed using alternative procedures.

“No one has been getting past JFK Airport immigration for the last hour. Line is a few 100 deep. Seems like their system did completely go down. Happy New Year!” said Jessica Yang, a program manager at Microsoft, in a Twitter post.

Other airports, including Denver International Airport, also said they were affected. A similar computer outage occurred a year ago.

“Operations returning to normal as @CustomsBorder computer issue resolved. Issue affected other US airports. Thanks for your patience,” Miami International Airport said in a Twitter post.

Mattis: Government shutdown would have ‘terrible impact’ on military

Syrian City is Flashpoint of Tensions Between Turkey and U.S.

This Is How Museums In And Around Houston Prepared For Tropical...

Cloud Bills Will Get Loftier

Packers-themed house located just across the street from Lambeau Field