Giant batteries charged by renewable energy are beginning to nibble away at a large market: The power plants that generate extra surges of electricity during peak hours.

Known as peakers, the natural-gas-fired plants are expensive to run, and typically are called into service only when demand rises and regular supplies are insufficient. That makes them vulnerable to inroads from lithium-ion batteries, which have fallen in price in recent years, and are emerging as a competitive alternative for providing extra jolts of electricity.

Numerous big batteries are under construction or consideration in the U.S., especially in the Southwest, where some companies see a shiny future for “solar plus storage” projects.

In Arizona, Tucson Electric Power is building a 100-megawatt solar facility and a 30-megawatt battery array. The project, being developed by

would allow Tucson Electric to store inexpensive solar generation in the morning, when power demand is low, and deploy it in the heat of the afternoon. The company hasn’t disclosed its costs.

A battery array three times the size of the Tucson project is being developed in Long Beach, Calif. Fluence Energy LLC, a joint venture of

, is building a battery that could power 60,000 Southern California homes for up to four hours. It will be the largest lithium-ion battery in the world—three times larger than a battery built last year by

“It really is a substitution for building a new peaking-power plant,” says

chief operating officer of Fluence. “Instead of living next to a smoke stack, you will live near what looks like a big-box store and is filled with racks and rows of batteries.”

The new way of providing peak-time power poses a threat to manufacturers of power turbines, such as Siemens and

, both of which announced large-scale layoffs in those businesses last year.

Because large battery arrays are still costly, their use on power grids remains limited to niche areas. But if batteries prove their value and reliability, they could play a larger role on the power grid in the future by storing more of the electricity that wind and solar farms intermittently generate for use when needed.

Peaking plants usually run only a few hours a day to provide extra power when demand is at its highest level. They typically run on natural gas, and burned about $1.1 billion of the fuel in 2016, according to federal data.

The federal government estimates that a new gas-fired peaking plant could generate electricity for about $87 for a megawatt hour, including the cost of building the plant and buying fuel. By comparison,

Colorado subsidiary recently ran an open solicitation and received 87 bids for solar-plus-storage projects at a median price of $36 per megawatt hour, one of the lowest such bids to date.

“I could see in 10 to 15 years where you have 30% of what is traditionally a peaker market served by storage,” said

Batteries have been used on power grids for several years, but mainly to provide brief pulses of electricity to stabilize the voltage and frequency, sometimes as short as a few seconds. On the PJM Interconnection, a giant power grid that serves parts of 13 states from Pennsylvania to Illinois, batteries provide about a quarter of such regulation services.

The batteries now being proposed and built are much larger, and meant to provide more sizable loads of electricity for four hours or more, said

an associate director at Navigant, a power-consulting company.

“Peaker replacement is the biggest market they have in sight,” said

a public-policy professor at George Mason University in Virginia who recently wrote a report for the Energy Department about grid batteries.

Overall, it still generally costs 35% more today to provide extra power via a battery compared with a conventional peaker plant, according to energy analysts at SSR LLC. But they estimate that batteries will be less expensive by 2024. Batteries, they add, are better suited to replace peaker plants in warmer areas than in colder climates, where winter peaks can last for longer than four hours.

Government directives are driving battery adoption in some states. California has a mandate to add 1.3 gigawatts of storage by 2020, and both New York and Massachusetts are developing similar programs. Last month, California ordered

to seek out bids for energy-storage systems instead of relying on three existing gas plants, and concluded the move “could result in lower overall ratepayer costs.”

The American Petroleum Institute, a lobbying group that represents natural-gas producers, applauds batteries but believes they should compete on a level playing field. Storage projects, when paired with renewable energy, currently qualify for a 30% federal investment tax credit, which was left intact in the recent tax overhaul.

“It appears that battery technology is now ready to compete in the market. This means the financial support provided by governments intended to encourage the development and deployment of the technology can be eliminated,” an Institute spokesman said.

a Republican, recently proposed a three-gigawatt mandate by 2030. He argues that investing in battery storage, instead of new gas plants, makes business sense for the sun-rich state. “The writing is on the wall,” he said. 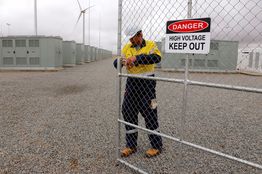 Big batteries are taking a bite out of the power market

This article has been sent to

This power adapter is a must-have for frequent travelers

Where Banks and Tech Are Going Head to Head

Yelp is betting on home services, which accounts for 20 percent...

Plane Crash Near Moscow Kills All 71 on Board