At holiday time, grown children return home to face a tricky challenge of modern life: How to work their parents’ remote controls.

At their home in Austin, Texas, Amanda and Nathan Ryan control their TV with their phones, like many tech-savvy millennials. The only remote control they own is their Apple TV’s, and it has five buttons and a touchpad.

The TV remotes at Ms. Ryan’s father’s home in Los Angeles are beyond their expertise. Mr. Ryan, 31, who runs a consulting business, said he’s the one educating his older relatives about their computers. When it comes to remotes, the roles are reversed: “It’s them explaining to me these crazy convoluted setups they have.”

This year the traditional remote-control lesson began almost immediately after they pulled into the driveway for a Thanksgiving visit.

Things got complicated quickly. The bigger green button (no, the other button) on the largest remote turns on the surround sound. The red button on the Vizio remote turns on the TV. The Roku remote toggles between Hulu, Netflix, HBO and live TV channels. Want it louder? Back to the first remote. Ms. Ryan, who works on Amazon integration at Whole Foods, pulled out her phone and started recording. 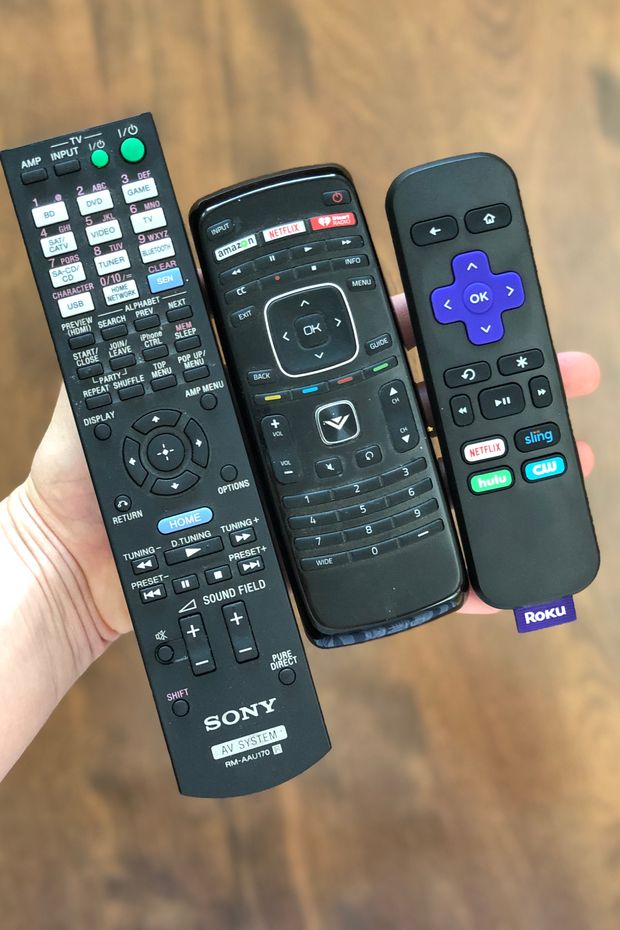 “We’re never going to remember how to do this,” the 29-year-old said.

Her father, Paul Kne, 60, said he’s tried to whittle down his remote collection but hasn’t had much luck. “If they could make one remote that could do everything I’d be happy, but nobody seems to be able to do it.” He tried a universal remote and “it worked on everything else but the TV.”

One year Ms. Ryan made a remote blunder—she’s still not sure where she went wrong—that took an hour to unscramble.

Collin Johnson, a 25-year-old web developer in Seattle, was confounded by the complex process of turning on the TV when he visited his family in Alabama last Christmas. It involves multiple remotes with buttons that have to be pressed in a precise sequence.

“I just wanted to turn the TV on and browse channels,” he recalled. “There were four remotes and I couldn’t figure out what any of them do.”

Mr. Johnson said his home entertainment system is simpler: he doesn’t have cable or complicated speakers. A list of applications appears when he turns on his new TV, and he navigates them with a single remote.

His mother had to step in to assist.  “There’s this weird combination you need to get them to work,” said Tammy Roper, 51. The secret is there is no one remote that turns the TV on: there are two, along with the power button on the TV itself, she said. “I’m the only one who knows the dance.”

Remotes are piling up as people try to stitch together cable TV, streaming content, gaming consoles, Blu-Ray players and speakers. Younger users used to navigating the world through a touch screen are struggling with the morass of devices with dozens of cryptically labeled buttons.

All the remotes mystify even the people who set the systems up. Ms. Roper said she has a bowl full of ancient remotes she’s reluctant to get rid of. 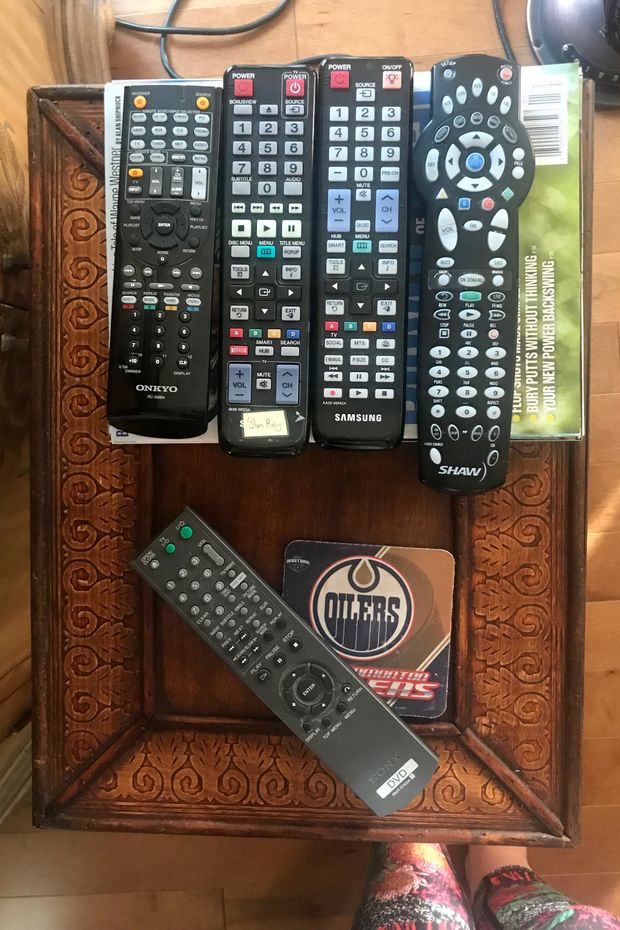 “I’m scared to throw any of them away because what if they start working one day?” she said.

Kimberly Pavelich, 34, a Ph.D. candidate in Ottawa, Ontario, is steeling herself for the inevitable frustration when she goes to visit her family in Calgary over Christmas. Her parents know exactly how to use the five remotes they’ve amassed over the years as they have layered a smart TV, sound equipment, and other devices in pursuit of the latest features.

“If you hit them in the wrong order, you’ll get picture but not sound. Or sound but no picture. Or you’ll get nothing,” said Ms. Pavelich, who at home streams TV from her laptop to a monitor and doesn’t use a remote at all.

Her parents are amused—they don’t see what’s so difficult.

“We show her every time, and she’s baffled. We say OK and we turn it on for her,” said Kimberly’s mother, Cathy Pavelich, 64. The Paveliches all “have a good giggle” about it, she said.

Monica Bellamy, a 34-year-old office administrator, said at her parents’ home in Duluth, Minn, it isn’t clear what all the remotes are meant to do: there is a “dusty old haunted remote” languishing in the corner no one can explain. She’s learned there is no use confronting the equipment on her own. If she gets up before her parents in the morning, she’ll typically wait for one of them to wake up and assist. “I usually have to have a tutorial,” she said. 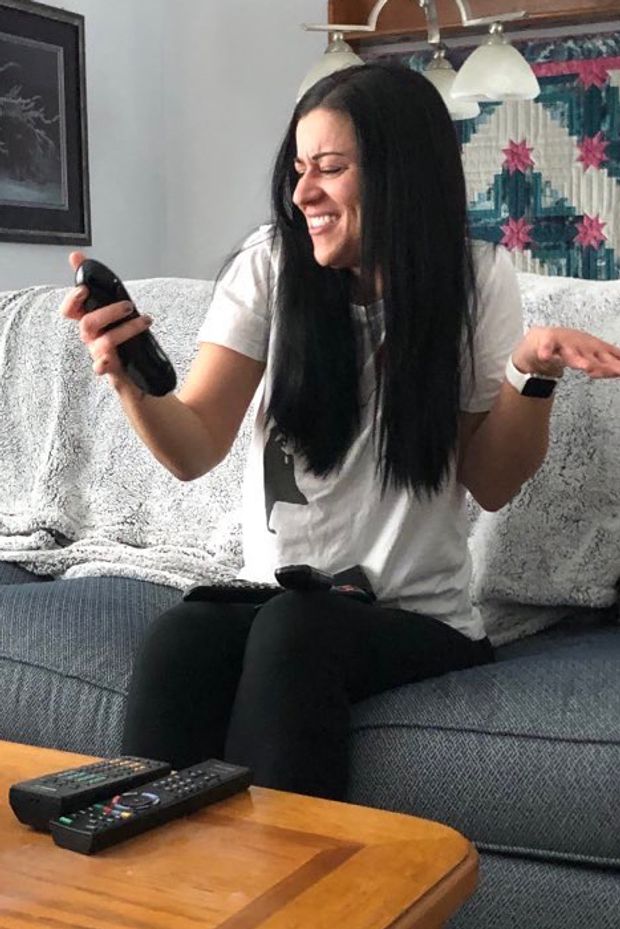 Every new babysitting job means a new system to learn for India McCarty, a 20-year-old college student in Nashville, Tenn. Parents are often impressed when they come home to find Ms. McCarty doing homework or reading.

“They’re always like, ‘oh you’re so diligent with your studies,’ ” she said. “I’m just thinking, ‘Yeah, because I didn’t know how to use any of these remotes.’ ”

Companies say they are trying to help tamp down on remote-control inflation.

is among those offering universal remotes, including ones it says can control as many as 15 devices. Ian Crowe, senior director of Harmony Remotes at Logitech, said the biggest barrier is getting the remote set up. He programmed one for his parents, who were using three remotes.

That has been a leap forward for Michelle Broderick’s in-laws, who she visited in Virginia for Thanksgiving. Turning on their TV had been “almost like a séance,” involving as many as four remotes with some 30 buttons apiece.

“Now they just yell at the remote control, ‘Netflix,’ and it happens,” said Ms. Broderick, a 42-year-old senior vice-president of marketing.

Not everyone wants to get down to one remote.

David Dwyer, a 64-year-old ophthalmologist who now works part-time, said he always liked having the latest technology. He recalls drawing diagrams to help his in-laws figure out their remote controls. But he is resigned to his five-remote system. “I’ve lined them all up and there they are. If it says Sony, it goes to the Sony TV. If it says Samsung, it goes to the Blu-ray,” he said.

His 30-year-old son Brad, a software developer, doesn’t think that’s working out so well. “There’s a thousand buttons you don’t want to touch, or it might change something,” said Mr. Dwyer. “Every time we want to watch a game, it’s an ordeal.”

The younger Mr. Dwyer thought he found a solution last Christmas when he bought his parents a universal remote that could be programmed for all the remote controls. It didn’t help. “Now they have six remotes instead of five,” he said.

Write to Alison Sider at alison.sider@wsj.com

Activists are outraged at an FBI report on the rise of...

The next generational shift in enterprise infrastructure has arrived

In Orban's Hungary, a Glimpse of Europe's Demise

Lawyers Faced With Emojis and Emoticons Are All ¯_(ツ)_/¯